The Giants’ season tickets holders have the option to be part of the Gotham Club — a private club associated with the team. The name stems from a team that used to exist, called the Gothams. This club takes an annual trip and this year my wife, Jan, and I were invited to go as alumni to spend time with season ticket holders. We traveled to Cooperstown and then watched the Mets-Giants series with 26 people.

We had the chance to go the Baseball Hall of Fame, a first for me! When you go to any Hall of Fame, the focal points are always the plaques, but behind the scenes there is so much more. Each player has a story. Being able to experience these stories was a really special time, and to be able to see my own file and some of my old teammates’ memorabilia was amazing as well. I even got to hold Babe Ruth’s bat! The more time we were able to spend at the Hall, hear the stories of the players, and feel connected to them, the more this became a magical place, which has served to preserve America’s greatest pastime.

While going through the Hall, I felt overwhelming gratitude. At one point, the curator even pulled out a few books that Jan and I have written, which are housed in the Hall of Fame! It was incredible! It put Jan and I in a place of reflecting more, spending more time thinking about what has taken place in our lives because of the game of baseball and the powerful platform it provides for the athlete. While you play, you’re so wrapped up in the game that you don’t think about the impact you might have years later. You’re too overwhelmed with the day-to-day, making sure your team wins. 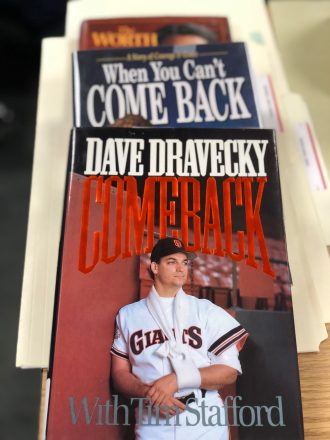 For us, being out of the game almost 30 years now, we’ve had many moments of gratitude and reflecting, but this particular trip really moved us into a different space and we were so overwhelmed. At one point in particular we looked at each other and said, “Without this game, we wouldn’t be on this trip with these incredible people being able to love them as Jesus does. We wouldn’t be able to have experienced all we have with the Giants family.” And we’re so grateful that the Giants have invited us back into their family.

Some of the fans who were on this trip with us were fans while I was playing; they were even telling me stories about my own career! I think it’s important for guys playing today to not take this for granted, but to realize the lasting impact they have beyond their careers with people that love them and follow them as fans. There’s such a wonderful connection that we now realize as a beautiful, almost magical thing. And to think that God’s the one who ordained it all and has planned it all out — wow. Little did we know that this was all part of the tapestry of life God has weaved for us from the beginning.

This trip helped us realize the significance of our career, from the Pittsburgh Pirates drafting me, to the privilege granted to me to put on a big league uniform with the San Diego Padres, to then becoming a Giant and being part of such a storied franchise. And now, being asked back into this family.

Sometimes we just have to pinch ourselves. God is so good.

Dave Dravecky is a regular contributor to The Increase and will be providing monthly articles and opinions.

A Prayer for Fathers - Dan Orlovsky

Who I Am in Christ - Shay Knighten

The Greatest Miracle is Being Born Again - Mary Pierce

Because of My Mom - Benjamin Watson