I love baseball. For me, it’s always been more than just a game; baseball has always opened up a world of opportunities, connections and relationships.

When I played on the East Coast for four years, I was pretty close to the Walter Reed National Military Medical Center — where all the soldiers were immediately sent after a major battle injury. I often would go and meet with 19-20-year-old kids who were only a week off the battlefield, many of whom had just lost their legs or an arm. I loved getting to know these guys, building relationships with them, and hearing their stories. Once they got back on their feet (literally got new legs), they’d have to learn how to transition back into society — a harder task than expected.

Many of these men were in the special forces, trained to do really important and critical tasks. They love that responsibility; it’s who they are. It’s how they’re built. But when they’re pulled out early and sent home, they don’t know what to do with themselves. The suicide rate for these men is high. They have a really rough time adjusting back to civilian life. I’ve talked to many of their wives who say they don’t recognize their husbands after battle. Physically they might look the same, but they’ve become a whole new person after what they’ve experienced.

At our ranch in Kansas, we started organizing hunts for these wounded veterans. We’ll bring in 7-10 like-minded guys at a time, put them in a team atmosphere again, many times with guys they already know, and we watch as they light up with joy. Obviously this is a different type of hunting than what they did overseas, but as they re-enter the world of strategy and mission, they discover purpose and drive once again. Seeing these men come to life as they retell stories from their days in battle, I begin to understand in a much more in-depth way just what they’ve been through. Many of these men have become dear friends of mine.

The more I’m around these veterans, the more I realize just how intense the effects of PTSD and brain injury really are. I’ve also been fortunate enough to go to Afghanistan with our general and experience just a small taste of what it’s like over there. These men have real scars and deep wounds from what they’ve been through.

In this state they are extremely vulnerable and open to the Gospel. They come home lost, searching for answers, and in need of help. This has opened up windows for us at the ranch to share the Gospel with these men. But we never want to preach at them. In a perfect world, they bring it up first. But even if they don’t, I have to earn the right to speak into their lives.

A lot of these men are now searching for their next mission. They’re out of war, done with what they’ve been trained to do, but they don’t know what’s next. That’s part of the process we try to help them with. In turn, I’ve learned so much from these men. I watch as they carry themselves with amazing discipline, which has taught me to appreciate life more and complain less. 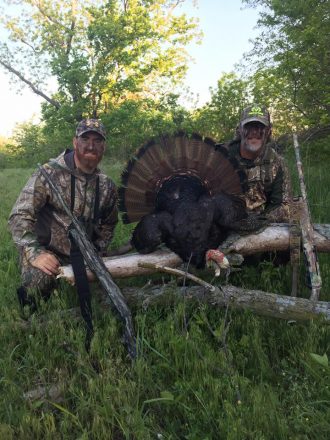 These trips are not advertised as a ministry. I want guys coming as themselves, with an eagerness to be around like-minded men again. Maybe the only chance I get to share Christ with them is when I say a prayer for them and their families at the start of the big group dinner on the very first night. When I express how thankful I am for them, maybe something will stir in their hearts. Sometimes that prayer has caused a few guys to come up and start talking to me about real life stuff. They’ve asked questions about why God would allow some of the stuff they’ve seen happen to women and children. A lot of them are hurting to the point where they’re open to anything and yet very guarded at the same time. By listening to them, learning from them, and showing them that I’m genuinely interested in their lives, I’m able to begin relationships with them that may open a door for the Gospel. It may be months down the road when the topic of faith comes up, but it’s always an honor when it does — one worth waiting for.

Because of baseball — because of the platform I’ve been given — people seem to trust me more than they might a total stranger. For whatever reason, if they recognize a face they’ve seen or a name they’ve heard, even if they’ve never met that person, they’re more apt to let them in and hear what they have to say. I want to make it very clear to these men that I want absolutely nothing from them. All I desire for them is that they relax, have a great time, and find a little of what they might be looking for. If that means I stay way out of the picture, then I will. If that means I join in the middle of the activity, awesome.

I’m open and willing to be used in whatever way God can use me to bless and reach these men and their families.

Adam LaRoche is a regular contributor to The Increase, providing monthly articles and opinions.

Check out Adam’s profile on The Increase: https://theincrease.com/author/adam-laroche/

If you enjoyed this article, please share to spread the Gospel with others:

Mixing It Up – Luke Weaver