We talked with Chicago Bears linebacker Sam Acho about his faith journey, how he’s living in the increase of Christ, and the mentors who have impacted his life. Here’s what he had to say:

What effect does your faith have on your lifestyle?

My faith in Christ causes me to see life through a different lens — a “look at God” lens. I can now see the day-to-day miracles God does in my life. I think about me coming back to sign with the Bears and the deal I was able to get. After eight years in the NFL, being on the veteran minimum — the lowest you can get — for the past three years in what they call a “proven” deal, God then opened up a door to come back to the same team on a multi-year deal. That was an “Only God” deal. I look at life through that lens.

Even some of the new guys we have on the team are an answer to prayer. I’ve been praying for a great community among our guys, something like what I’ve seen on the Eagles this past year. I began to think, “Man, God, maybe I should go to Philadelphia!” I just wanted community like that. That’s what I want to see on this team. I would pray, “God, can You? Can You? Can You?” And then we signed Trey Burton. He’s an amazing man of God. Seeing the way he lives his life is awesome; doing life with him is going to be even better.

There are also doors God’s been opening up within our community, not only on the field but off of it as well. Being able to be an open vessel and say, “God, how can You use me to have an impact on this city?” And God’s doing that time and time again, from opportunities in prisons to meeting with the superintendent of the Chicago PD, God is just opening up doors.

What role does my faith play in my life? It allows me to look at God always.

How did your journey with Christ begin?

My journey with Christ has to begin with my parents. My dad is a pastor and I wasn’t the type of pastor’s kid who rebelled or walked away from the faith. I grew up going to Oakland Bible Fellowship Church, where Dr. Tony Evans was the senior pastor. So I grew up hearing great messages, having awesome worship and knowing truth, but I didn’t start living it out until I went to college in Texas. Even though I was baptized at 15 years old, I didn’t take it seriously until my sophomore year in college, when my younger brother Emmanuel came to school with me. My whole life, I wanted to set a good example for him. I knew that if I really wanted to walk the walk and not just talk the talk, some things had to change.

In college, we had this group called COAH (City On A Hill) that we formed with some guys on the team. We started asking the question, “How can we be a light? How can we be a city on a hill?” As Matthew 5 talks about, we weren’t meant to be hidden. So we started doing Bible studies together as a team, led by Colt McCoy. We had 20 or so guys come to this player-led Bible study. We also had dance parties. Obviously everybody wants to have a good time in college, so we asked ourselves, “How can we have a good time but still glorify God?” We found unique ways to have fun — making Christian remixes to popular rap songs and holding freestyle battles where we would interject Christ.

Ever since, God has been pruning me and teaching me to be more like Him. I often realize just how far I am from His perfection but my distance is overshadowed by the grace of God.

Who have been the mentors in your life? How did God bring these people into your life?

I always looked up to my mom and dad; their marriage has been a great example for me. But also, one of the greatest things about sports is that I’ve had some great coaches who love the Lord, who loved me, who coached me hard and believed the best in me. One of my favorite coaches is Coach Guiler — my senior year high school basketball coach — he’s now the godfather of my son. I remember how he poured into me and the other guys on the team. He saw greatness in me when I didn’t see it in myself. He pushed me and pushed me and pushed me but at the same time he was loving on me. I got to see him as a young married guy, doing what he loved and I just said, “Man, I’d love to be like that when I get older.”

In college it was some of the guys on the team. There was a quarterback by the name of Trevor Walker who literally said to me, “Hey, let’s study the Bible together. Let’s not just talk about it, let’s learn what the Word of God says.” Trevor would bring me in and read the Word with me.

I’ll also never forget a guy by the name of Arthur Webb, who was the team doctor for the

Washington Redskins. He believed in me and said, “Sam, if you want to make it to the NFL, here are some things you have to do …” There was also Clif Marshall, who trained me for the NFL Combine. 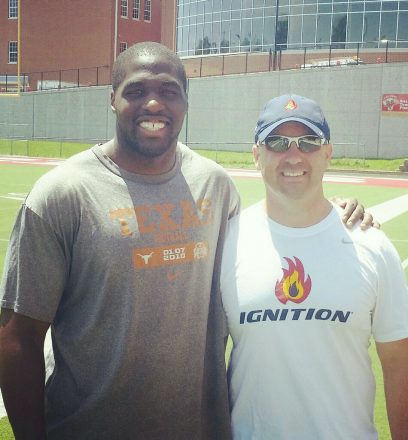 Since then there have been great guys in Chicago who have been really great friends and mentors from local teams, churches and even from my own team.

What does the Increase of Christ mean to you?

For me, John 3:30 means me getting out of the way and continuing to look at God. At times I can easily get caught up in people-pleasing. In fact, this used to be a really big struggle for me, whether it was parents, coaches or teammates. You can’t serve God and people at the same time, you have to pick one. Nobody can have two masters.

Last year I was brought to terms with that when it seemed like my coaches weren’t really for me. Then around the same time it seemed like my teammates weren’t really for me. I had no one to look to and no one to lean on besides God. I remember feeling like, “OK God, You and I, we need to get close because everyone is turning their back on me. But you say You’ll never turn Your back on me; You’ll never forsake me. So let’s do it.”

Even now, I see a new team, new coaching staff and new players. It’s a time when a lot of guys may be jockeying for status, but I’m focused on how I can serve. Even if that just means picking up weights after a workout, or inviting people to my church, or getting into the community without caring what people think. It’s saying, “Hey guys, these are the gifts God gave me, if you want to come along, great; if you don’t, great.”

Another piece of letting Christ increase and me decrease requires me leading from the back. For the longest time I wanted to be team captain — that was my goal for the past few years. I wanted it so bad I wondered if I should vote for myself, but then I realized if God wants me to get it, I will. If He doesn’t, I won’t. Either way, I’m going to learn how to lead from behind, doing whatever it is God’s calling me to do in the moment.

What is your life verse and why?

“Yet he did not waver through unbelief regarding the promise of God, but was strengthened in his faith and gave glory to God, being fully persuaded that God had power to do what He had promised. This is why ‘it was credited to him as righteousness.’” — Romans 4:20-22

This passage talks about Abraham, who was promised to have a son. Abraham was old, his wife was old, and he didn’t really believe that God would fulfill this promise, but He did. Then God told him to go and sacrifice that son — the promised son. So Abraham woke up early in the morning and went to obey God, but before he did, God brought a substitute.

When I think of this verse I think of a few key things. He didn’t waver at the promise of God, he gave God glory, strengthened his faith, and was fully convinced. I try not to waver, even when things don’t look good. I have doubts a lot of times, whether that’s in my ability, position or whatever it is, but I also have a confidence in God and His provision.

Another verse is Hebrews 11:1, which talks about faith being, “the confidence in what we hope for and the assurance about what we do not see.” Hebrews 11:6 follows to say that without faith it’s impossible to please God.

These verses stick with me when I’m tempted to give way to doubt.

Sam Acho is a regular contributor to The Increase, providing monthly articles and

Who I Really Am - Dalton Risner