This past Sunday the Denver Broncos defeated the defending Super Bowl Champion, New England Patriots, in an intense 20-18 matchup that came down to the Bronco defense making a final stand on a two point play with 12 seconds left in the game and the Denver special teams recovering an onside kick to seal their trip to Super Bowl 50. Today, at the Bronco training facility, many players from that defense and special teams stood up, on camera, for their Faith in Jesus Christ as they added their voices to TheIncrease.com’s short film, Football Sunday 2016, that will be shown in over 1400 churches on Super Bowl Sunday! 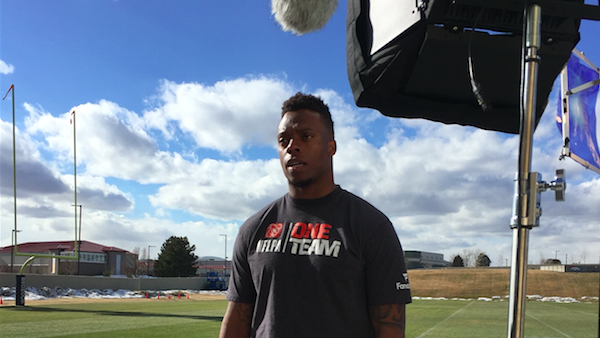 Here is an inside look at their stories:

– For rookie cornerback, Lorenzo Doss, the lifelong dream of playing in the Super Bowl is right in front of him. His immediate reaction after Sunday’s game was to give glory to God.

“Once the game was over,” Lorenzo reflects, “and the confetti was falling from the sky, all I could do was look up and say, ‘Thank you God.’”

– Linebacker Brandon Marshall, approaching his second Super Bowl in four years, has found Jesus to be his stronghold through both the hardships and the successes in the NFL.

“Having Him (Jesus Christ) on your side,” He says, “makes everything a lot easier, no matter what the circumstances are.”

Brandon is among many of the Broncos who are giving all the glory to God. Many of his teammates have been placing their trust and satisfaction in Christ as well.

– Defensive end Antonio Smith has made sure to be spending time reading God’s Word every morning to start off each day by putting God first.

“The Bible is our daily bread,” says Antonio. “Jesus Christ fills me in every way. There is nothing else that has that power.”

The Christian fellowship on the Broncos’ team has been an encouragement to many on the team as they meet together for weekly Bible studies and chapels. 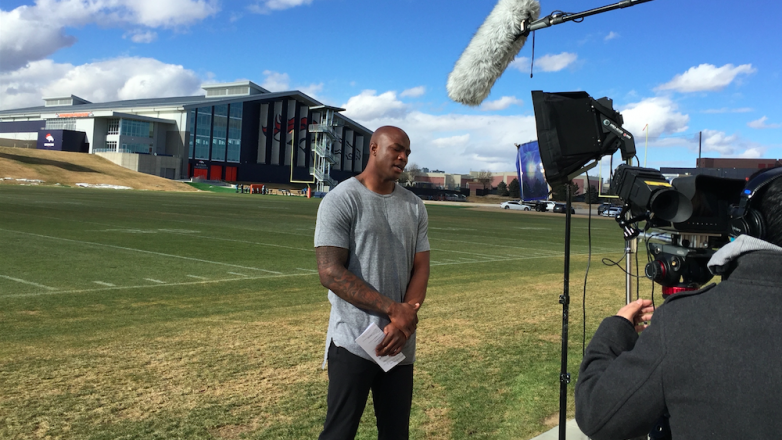 – “The Bible is our playbook for life,” adds the Bronco’s punter, Britton Colquitt.

– Linebacker Lerentee McCray has been with the Broncos for three years and hopes that this year they will bring back a Super Bowl win. But his hope is ultimately placed in Jesus Christ, the One who offers eternal salvation.

“You always want to be a champion,” says Lerentee. “And there’s an even greater blessing on the other side of this life.”

“Now this is eternal life: that they know You, the only true God, and Jesus Christ, whom You have sent.” -John 17:3

– Wide receiver Jordan Norwood shares how he has experienced God as his ultimate Provider through all that life has thrown him.

“Faith in God doesn’t fit into my life,” he says, “it is my life. Everything else fits in around that.”

– Former NFL running back, Ray Jackson, was hired by the Broncos this season as the Director of Player Development. When he joined the team Ray had more in mind than to just make sure the players were doing their best on the field.

“We are out to win souls and Super Bowls,” says Ray.

Reflecting on his own career in the NFL, he has realized that full satisfaction cannot be placed in football alone.

“When you grow up playing football, all you think and talk about is the Super Bowl” he reflects. “But it was amazing that when it came to the day that we won the Super Bowl and the confetti came down, all I could think was, ‘That’s it?’ It was so short-lived but it was a great reminder that God’s Word lives forever.”

– It is linebacker DeMarcus Ware’s first year with the Broncos and first time going to the Super Bowl. With every team he’s played and every game he’s competed in, he has kept his eyes focused on his one true hope.

“Jesus Christ has always been the center of who I am,” says DeMarcus. “If you’re not a part of something, how do you know your purpose? God is my purpose and I place all my hope and trust in who He is.”

– For rookie cornerback Taurean Nixon, his birthday falls on the same day as Super Bowl 50. This being his first year in the league, he couldn’t imagine a better birthday gift than the chance to play in the biggest game of the year.

“I thank God for this opportunity,” he says with a huge smile on his face, “and with everything I do, I give glory to God. In all the obstacles I’ve faced in my life I know that God has brought me through and placed me here for a purpose. He has helped me understand who He is through all of it and has given me a talent so that I can serve others. I am so thankful for that.”

“I can do all this through Him who gives me strength.” -Philippians 4:13

These are only a few of the great stories of  God working in and through the athletes in the NFL. Join us on Football Sunday as players from Super Bowl 50, as well as Drew Brees, Thomas Davis III, and Trent Dilfer, share their stories of how Jesus Christ has changed their lives and continues to reveal himself to them. http://footballsunday.com/

If you enjoyed reading this article, please share on the social media sites below: