The Carolina Panthers have been the NFL team to beat for the 2015-2016 season. At 17-1, they are headed to Super Bowl 50 to face the 14-4 Denver Broncos at Levi’s Stadium in Santa Clara, California. We spoke with Panthers’ linebacker, Thomas Davis and cornerback, Charles Tillman, as they prepare to compete in the biggest football game of the year.

“I’ve always loved Super Bowl Sunday,” says Thomas, “being around family and friends at home and watching the biggest sporting event of the year. Now I get to be a part of it.”

This year, Thomas is looking forward not only to competing in the game, but also sharing his testimony and faith in God with thousands of churches on Football Sunday. Everyone who watches Football Sunday will see Davis’ story of recovery and grace, and the faith that saw him overcome seemingly insurmountable odds.

“I hope when people watch my story as part of Football Sunday,” he says, “they see all the things that I’ve overcome as a person and a player and how truly amazing God is for bringing me through it all. There’s really nothing special about me, except that I believe in Him. God shows favor to those that believe in Him—I’m a true believer in that.”

“I can do all things through Him who gives me strength.” – Philippians 4:13

Thomas has had an incredibly successful season with the Panthers, and though he broke his right forearm in last week’s NFC title game against Arizona, he still expects to start in Super Bowl 50, less than two weeks away.

“I can’t begin to describe how good God has been to us as a football team and to me as a player,” Thomas describes. “Four or five years ago I thought my career was over; so many people told me to quit and walk away from the game but here I am now, standing before you as a guy who made the Pro Bowl team and is headed to the Super Bowl with my team! I want people to know that through it all, I’ve never lost faith. I’ve never lost sight of what is important and that is to follow Jesus Christ, keeping Him the head of my household and my life.”

Cornerback Charles Tillman has also experienced God’s blessing and provision as he trusted in Him when joining a new team this season. 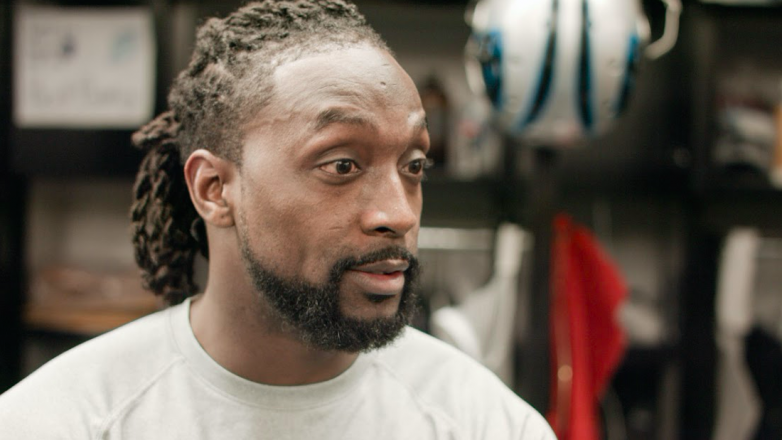 “Being in Chicago for 12 years and not knowing where to go or what team to sign with, I did a lot of praying before this season,” Charles reflects. “When I was approached to sign with the Carolina Panthers, I prayed about it and felt like this was where God was calling me to be.”

The season started off extremely well for the team and for Charles personally who was starting every week. However, his season came to an abrupt halt during week 17’s game against Tampa Bay when he tore his ACL.

“It was really rough,” he remembers, “but I know that God had a plan. Sometimes I don’t understand His plan—though I would like to—but I know that He always has a master plan and we just have to have faith in that. As I’ve learned to let go and trust God to take the wheel, it’s been truly amazing to see His power.”

“Trust in the Lord with all your heart and lean not on your own understanding; in all your ways submit to Him, and He will make your paths straight.” -Proverbs 3:5

Join thousands of churches for Football Sunday before Super Bowl 50 to watch these athletes as well as many Broncos and additional NFL players such as Drew Brees and Trent Dilfer share how Christ has changed their lives. Register with your church now at: footballsunday.com

Who I Really Am - Dalton Risner