Manny Ramirez is entering his tenth season as a center in the NFL. He and his wife of ten years, Iris, spoke with us about what married life in the NFL looks like for them.

Manny: The best part about marriage is knowing that you have someone by your side to go through both the hard times and the good times together. I wouldn’t be where I am today without Iris, she’s my best friend—someone I can always count on.

Iris and I got married right before my rookie year in the NFL. I was busy with college ball and she was working a lot. Soon after graduating, I was drafted by the Lions and we were expecting our first baby. I went to Detroit but Iris stayed in Texas with the baby. I knew I was a father but I didn’t get to fulfill the duties of a father because of the distance. I really struggled in Detroit; I wasn’t accustomed to the pressure and criticism that I was facing. When Iris and our new baby moved up to Detroit to be with me, suddenly I had to take on the role of a father for the first time. I remember waking up in the middle of the night to the baby crying and I said to Iris, “The baby’s crying,” and she said, “Ok, go get her.” That really caught me off guard; I wasn’t ready for this.

In my fourth year, in the fourth game of the season, I was released from the Lions. God really humbled us because we didn’t expect to have a year off of football. We were at a certain comfort level where we thought we were all set but God used this time to tell us, “It’s not the NFL or money that give you security, it’s Me.” And He showed us that. When I was cut it really brought us to our knees and showed us that without Him we are nothing.

“I will refine them like silver and test them like gold. They will call on My name and I will answer them; I will say, ‘They are My people,’ and they will say, ‘The Lord is our God.’” —Zechariah 13:9

Manny: If we didn’t go through what we went through, we wouldn’t be where we are today because we learned to always approach everything together as one. We’re able to go to God and fight through the struggles together. 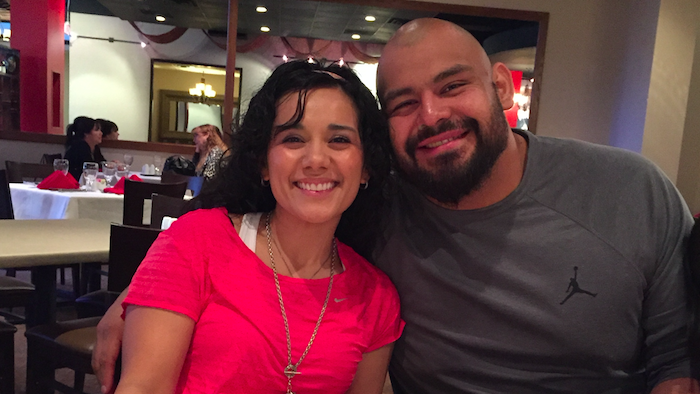 Iris: This really was a growing experience for me. When we were first married I was disappointed; I was expecting to get married and live happily ever after but it wasn’t the luxurious life I thought it would be. “I didn’t sign up for this,” I thought. “He’s never home and here I am, stuck here alone with the baby.” But during this time God really showed me who I was in Him; He showed me the purpose of sanctification. God used those first years of brokenness to sharpen and refine us to be more like Him. We realized that our purpose in the NFL wasn’t about Manny playing football, but it was about God using this as a platform for us to bring Him glory. Yes, God is using football in our lives but it’s about something so much greater than that. Now we see the league as an opportunity to share God’s love instead of it being a source of security for us. As we enter into our 10th year in the NFL we know that only God has made us get this far—He is our source of provision.

When Manny and Iris joined the Denver Broncos in 2011, they opened their home to lead team couples’ Bible studies, encouraging others in their spiritual walks and marriages as well.

Iris: God didn’t give up on us. He knows what we need and He has prepared us for this ministry.  I look back at what we were going through at the beginning; I didn’t know why we had to struggle as we did but now we see why God allowed us to go through that. It was to bring Him glory and bring us closer to Him. Now we are able to really pour into other married couples around us, both in the NFL and in our church. Whether you are in the NFL or not, marriage is marriage and it’s hard. If it wasn’t for us going through what we went through as a couple, we wouldn’t be able to help others in the ways that God is using us now.

In 2015, Detroit called Manny back to the Lions.

Manny: We were not expecting to go back to Detroit. This past year we experienced the same scenario we had in my rookie year. We just had our baby, Cade, so Iris stayed back in Texas with the family while I went off to Detroit. As we entered this situation again our foundation was so much stronger, we were able to understand that God was in control. The situation wasn’t much easier, but instead of taking out our frustrations and problems on each other, we knew that we would go to Christ.

“‘For I know the plans I have for you’ declares the Lord, ‘plans to prosper you and not to harm you, plans to give you hope and a future.’” —Jeremiah 29:11

Living with a Purpose – C.J. Hamm

From the Pitch to the Pulpit - Gavin Peacock

Trust in Something Bigger - Brooke Wyckoff

Living with a Purpose - C.J. Hamm

Joyful No Matter What - Ali Aguilar