After the disastrous floods swept through the town of Baton Rouge in early August, thousands of homes, businesses, and schools were devastated. Southside Junior High School in Denham Springs lost almost everything: Desks, computers, band equipment, as well as all of the football team’s equipment. The coaches admitted that it would take a miracle to get their football season back on track.

Southside’s students and teachers are unable to meet in the damaged building; their rivals at Juban Parc Junior High School opened their doors on a staggered schedule so Southside classes could take place from 12:30-6pm. 90% of the boys on the Southside team are not living in their homes because of flood damage. Most of these families had not purchased flood insurance because their district has always been considered a “no flood zone.” 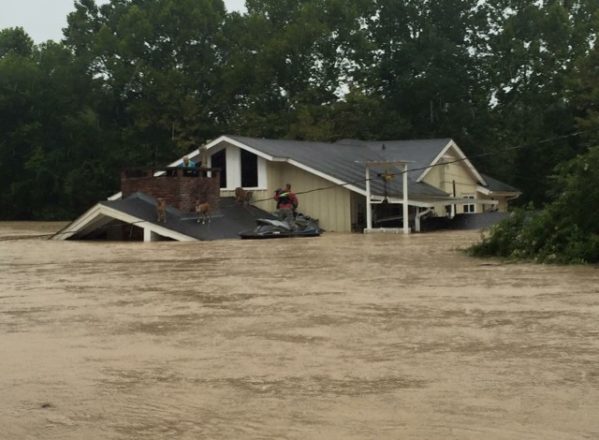 Meanwhile, Southside’s football coaches called for the first practice to be held in another county on September 6th.

Lee Ann Watson, mother of Southside 7th-grader Dylan, remembered the day that the boys were told their season was over before it had begun.

“My son was so excited,” she says. “But after the two-hour practice, I saw each one of the boys come out looking so sad. They weren’t fired up about the upcoming season like I expected. When Dylan got into the car he looked at me and said, ‘Momma, we lost everything. Unless we have a miracle before Friday, we have no season.’”

With the first game scheduled only two weeks in the future, Head Coach Brett Chatelain knew that if they couldn’t replace their equipment in time, they wouldn’t be able to play.

When the team parents heard the news and saw their heartbroken boys, their way forward became crystal-clear.

“Sports are the only hope for normalcy that these boys might have right now,” said Lee Ann. “It’s about more than just the game of football. But we knew we couldn’t ask anyone locally to donate—everyone has lost everything they had. No one’s even able to live in this county right now, so we had to look outside for help.”

The parents created a GoFundMe page and spread the word through social media that they needed to raise $10,000 to make the boys’ miracle.

Lee Ann posted the cry for help on her Facebook page and asked many to share. She then called a great friend of hers, Tiffany Bailey, a former Southside teacher, to advocate for the cause.

“This is my home parish, I grew up there,” said Tiffany. “Lee Ann doesn’t use Twitter, so I immediately wanted to help. I tagged The Increase, hoping to spread the word.” 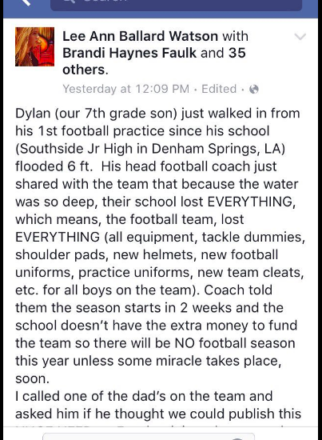 When The Increase retweeted the plea to resurrect Southside’s football season, the pro athlete community took notice. Baltimore Ravens tight end Benjamin Watson immediately promised that if the first $5,000 was raised, he would match it. Soon thereafter, former Panthers cornerback Charles Tillman stepped forward to say that the first $5k was raised.

“When I saw the response by these two men I was floored,” Tiffany enthused. “I called up Lee Ann, who was just as shocked as I was. We couldn’t believe it!”

For these two NFL athletes, the tragedy hit too close to home to stand by and watch. With $2,600 already raised, Charles and Benjamin made sure that the rest of the $10,000 was raised that day.

But the donations kept coming—within two days, the Southside Junior High School football team had raised $20,000 for their 2016 season.

“These kids were victims of circumstances that they had no control or even influence over,” Charles shared. “When my parents divorced when I was young, football was the only safe haven that I had. Football was the one outlet I had where I could go to have fun and not worry about anything else. I found brotherhood there. It taught me hard work and respect, and it helped reinforce the kind of character that my parents instilled in me. Junior high is an especially influential time in a child’s life so I knew that this was really important. The devil loves an idle mind and I didn’t want him to have a chance with these kids.”

Benjamin, who has spent a lot of time in the region visiting his wife’s family, was already paying attention to the events in Baton Rouge, and the plight of people there was already on his mind.

“We’d been following the flooding pretty closely,” he said, “and this particular situation really struck me. I saw that some young men needed football equipment and recognized an opportunity to love on people who needed it. I may never meet these people, and I don’t know them from Adam, but it’s part of our mission to share the love of Christ with those in need.”

In the time since the floodwaters receded, both Benjamin and Charles have been corresponding with individual parents and players to offer their support and ongoing assistance.

According to Lee Ann, when Coach Chatelain shared the news that their football season had been saved, the boys’ eyes lit up and they clapped their hands and cheered. Their renewed hope and excitement spread to their parents as together they experienced the miraculous through the help of many generous donors and a couple of pros who used their platforms to bring added visibility to the team’s need.

“I’m blown away by the humility and compassion of these two men,” said Lee Ann. “Usually when you think of pro athletes, you think they are all about themselves. I know that these men are Christians by the way they are loving our community. In a public school they’re not going to hear about Jesus, but I’ve been able to tell our boys that these men are not just about football, they’re about making a difference in the name of Jesus Christ. This is a great example to show our boys the love of Christ through loving others.”

Many stepped up to restore a sense of normalcy for the boys on Southside’s football team. Social media was a help not only in getting the funds raised but also in sharing the love of Christ.

“This is when I love social media,” said Charles, “The times when through it we’re able to share the message of hope.”

This again-hopeful football team has ordered their new equipment and uniforms. And though they have lost 50% of their players—those who have had to relocate too far away to continue playing—they believe that one day their team will be fully re-built.

In the meantime, they’re sharing a field with the Juban Parc team.

“When I pull up to watch our team practice, it becomes so real what has happened to us,” Lee Ann admits. “On one side of the field, the Juban Parc team has all of their equipment and uniforms, on the other side our boys are all mismatched and trying to practice as they wait for their equipment to come in. We really have lost everything. . . .  I realize now that you never can fully comprehend the devastation of a situation unless it happens to you personally. When it does, your life is changed.” 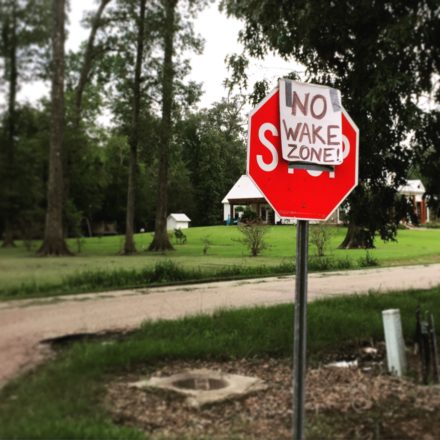 Within two week’s time, Southside’s new equipment and uniforms arrived, bringing with them a little bit of much-needed normalcy.

“There are a lot of tragedies in our world,” said Benjamin. “You can’t do everything for everybody, but you can be sensitive to the things that God puts on your heart. This was an opportunity for us to share God’s love in a tangible way. This is about more than helping young men play football; it’s an opportunity for them to experience the gift of generosity and pass it on to others when they are given the chance.”

“Just as a body, though one, has many parts, but all its many parts form one body, so it is with Christ. For we were all baptized by one Spirit so as to form one body—whether Jews or Gentiles, slave or free—and we were all given the one Spirit to drink. Even so the body is not made up of one part but of many.” —1 Corinthians 12:12-14

Continue to Stand Firm on Who God Is – Bryant Young

Because of My Mom - Benjamin Watson

Continue to Stand Firm on Who God Is - Bryant Young