Sam Acho after signing his new contract with the Chicago Bears.

It’s been a journey for me in Chicago. When I was in Arizona for four years, everyone thought I was going to retire a Cardinal. I was a fan-favorite, the coaches loved me, ownership loved me — the whole deal. But in 2013 I had an injury in Louisiana and it kind of derailed my dreams. I had a really good rookie year with seven sacks, a really good second year — started every game, four sacks, three interceptions. Then the third year I broke my leg in a game in New Orleans; I didn’t really know what the future held.

Fast forward to my fifth year when I went to Chicago, and I went with the new goal of a fresh start and new beginnings. I thought, “If I play well, I’m going to get this dream deal I’ve been waiting for.” I felt like I did that to the best of my ability during my first year in Chicago and expected a larger deal, but I was given another league minimum. I was confused, upset, not really sure what God was doing with that. I was learning not to put my worth in other people’s opinions.

I played my second year in Chicago and didn’t want to come back to that team, but ended up signing another one-year minimum deal with the team. People were telling me the writing was on the wall; they referred to me as a “great locker room guy,” but they never talked about what I did on the field. I couldn’t help but think, “I know I’m a great leader, but I’m a great player too!” Finally this year, God stripped away all the things I used to hold onto, like my coaches loving me. Last year I didn’t get that; I was benched early in the season, I was ignored, my teammates didn’t have my back. I asked God, “What do You want me to do?” His message to me was just to rely on and trust in Him.

The moment I finally realized that, it freed me up to play my best football. And the greatest part is that the best is yet to come.

This year during free agency, my wife asked me, “Do you want to go back to Chicago? What do you want to do?” And I replied, “I don’t know. Whatever God has in store.” But she said to me, “But what do you want?” I really didn’t know! She told me, “You have to pray specifically.”

In Habakkuk 2:2-3 the Lord says, “Write the vision and engrave it plainly on [clay] tablets so that the one who reads it will run. For the vision is yet for the appointed [future] time it hurries toward the goal [of fulfillment]; it will not fail” (AMP). She told me to write down my goals — plain and clear. Then she asked me one more time, “What do you want?” I said, “You know what? I want to go back to Chicago, I want this much money guaranteed, this, this, this and that.” And she said, “All right, let’s pray for it.”

So we started praying — and we got exactly what we prayed for, and more.

Over the past year, I had developed a relationship with George McCaskey, the chairman for the Chicago Bears. The relationship was built mainly around the topic of racial reconciliation, wanting to bring people together, whether that’s police, the African-American community,  poor communities, or whatever. We’ve been on this journey together, doing a lot of visits and trips together. That culminated in a trip to Angola Prison in Louisiana; this trip started the first day of free agency.

George picked me up from the airport and my agent called, saying, “Hey Sam, the Bears aren’t budging on the deal they had before.” I mentioned to him that I was busy, who I was with, and that I had to call him back, to which he replied, “Sam, if you’re with the owner, you’ve got to let him know other teams are interested! Wine and dine him, do whatever you need to do. This is perfect!” But I said no. I was going to let God do this thing. I had spent too much time worrying and people-pleasing, I was done with that.

That night — the night before free agency opened — one of the pastors on the trip asked me about my thoughts on the new coach and how that would affect me. He didn’t know it wasn’t a guarantee that I would be on the team again. When he asked me that with George sitting next to me, part of me wanted to say, “If George signed me, I’d have a better answer for you.” But instead I told him that with the same offensive staff, not too much would change.

Before I went to sleep that night, I remember journaling, “I’m finally free.” I didn’t know that meant but I finally felt free.

The next day we were in the prison, no phones allowed, and guys were getting called and signed left and right. Even some of the guys on the trip brought their phones in during some of the breaks and they were getting calls from teams. Finally someone asked me, “Hey, what have you heard from the Bears?” I said, “Nothing really, but let me just check my phone.” During our lunch break, I went to the car, grabbed my phone, and noticed my agent had just called.

When I called him back he said, “Sam, you’re never going to believe this. I don’t know who you talked to or what you did, but that number that you wanted, the Bears went up to it.”

George didn’t know and I wasn’t going to tell him. But later on that night he heard the news and I’ll never forget that moment. He ran down the aisle of the chapel, gave me a huge hug, and was almost in tears as he said, “This is good news for the Bears.” 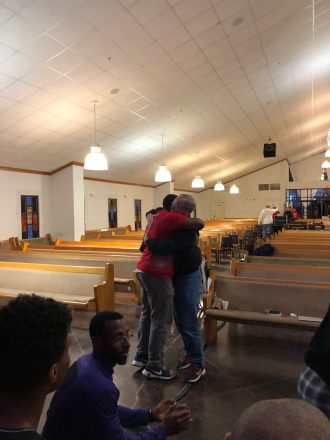 Sam Acho and George McCaskey in the Angola Prison chapel

It was one of those moments that God did a miracle. The same place where I broke my leg five years ago and thought my dream was shattered, was the same place my prayers were answered while trying to build His Kingdom — in Louisiana.

This past year, I was at a point where things seemed like they were not going to go my way. But I was reminded that the struggle is what makes the joyous moments that much better. If it weren’t for those three years of minimum after minimum after minimum, this contract of $7.5 million for three years wouldn’t be as sweet. If it weren’t for a broken leg and many injuries, aches and pains, the fact that God’s given me health this year wouldn’t be as savory.

Sometimes we forget about the struggle and how much it produces character and hope in us. The joy I have now can’t be compared with the heartache and frustration I had before, but it only came about because of the perseverance of going through the fire.

What I’m most excited for in this season is this newfound freedom of saying, “I’m going to serve God.” The vision God gave me for serving Him includes me being a beast on the football field. I’m going to be a dominant football player and you all can’t say or do anything about it. Last year I gained a confidence to say, “I’m going to do it my way because I believe God showed me how to get it done.” I’m going to do it that way and be proud of it instead of being afraid to task risks.

God gave me a specific set of gifts and abilities, and instead of shying away from them, I’m going to maximize them on and off the field.

Sam Acho is a regular contributor to The Increase, providing monthly articles and

If We Only Knew – Benjamin Watson

For His Glory – Kirk Cousins

Respect for Our Leaders – Trey Burton

What Nothing Can Separate - Janie Reed

Learning How to Adapt - Nate Augspurger

If We Only Knew - Benjamin Watson